Recently, I started to keep a game controller next to my computer for the rare occasions I want to play a game. But, sometimes, when watching a video or reading a document, I caught myself picking the controller to press its buttons for some distraction. During one of those moments, I realized I wanted to use the game controller as a remote control for the Mac in order to control playback, volume, scrolling and more. Today, I am happy to launch my latest app: Controlly. 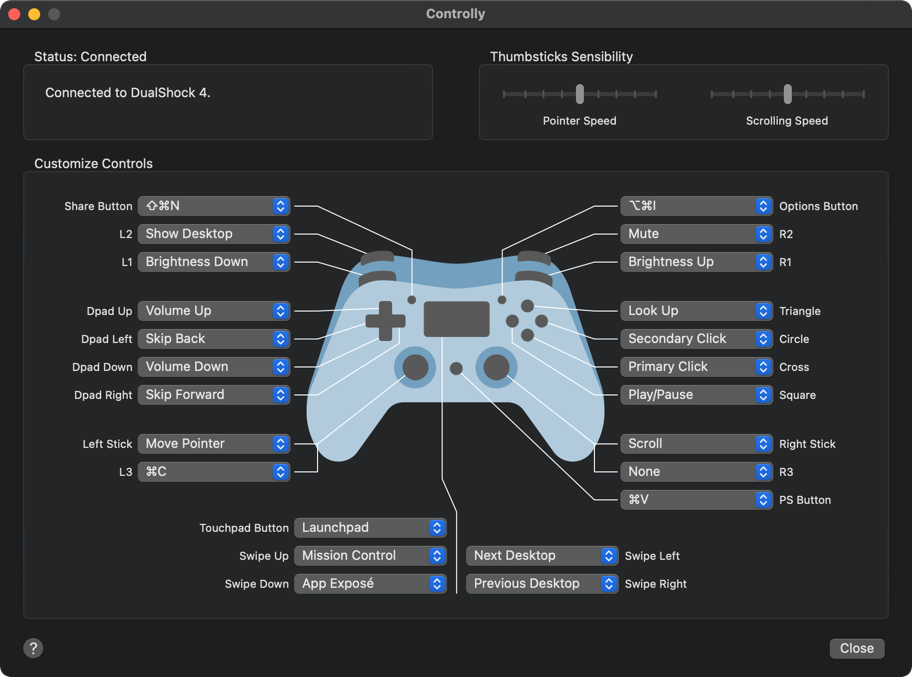 As someone who suffers from computer-related RSI, I am very interested in alternative ways to interact with the Mac. That’s why I created the app El Trackpad a few months ago. This app basically transforms the iPhone or iPad into a Magic Trackpad, with great support for system gestures like opening Mission Control, App Exposé, Launchpad and more. It was clear to me that I would love the ability to trigger these actions with the game controller as well.

So, I started a search for apps that could turn a game controller into a remote control for Mac. Unfortunately, the closest thing I found were key mapping tools. They allow users to map each button on the controller to one letter or number key. That is good for gaming, but not enough for a general purpose controller for the Mac.

Besides that, these key mapping tools do not support keyboard shortcuts and their user interface could be more visual in my opinion. One of them even supports mouse movement and scrolling, which is nice. But, the acceleration of the pointer did not feel right and I found it very hard to move the pointer to where I wanted it to go.

At this point, I felt I had to develop the app I wanted to use and the set of features I had in mind was very clear. I wanted a very visual user interface, nicely tuned mouse actions, ability to set custom keyboard shortcuts and trigger system conveniences like Mission Control, App Exposé, etc. Also, I still wanted to control playback, volume and a few other extra functions if possible.

After a few weeks of development and a lot of help from friends who tested the app and gave me invaluable feedback, I am pleased to announce that Controlly is now available on the Mac App Store. I hope it can be as useful to others as it is to me.